(Update 23/08/2015: Source files on Github)
I am a big fan of shoegaze / noise rock bands and one of my favourites bands is Jesus & Mary Chain and their album Psychocandy. That album is well known for its unique and characteristic dense wall of sound with that white noise (switch-on vacuum cleaner, washing machine and all appliances and let them couple to the guitar amp) that served as inspiration for a coming shoegaze generation of bands: Ride, My Bloody Valentine, Cocteau Twins, Lush, Spacemen 3, Loop... and even today shoegaze bands like A Place To Bury Strangers, Skywave, Ceremony, Screen Vinyl Image or 93MillionMilesFromTheSun, The KVB, The Lost Rivers, The Soft Moon...
It seems that one of the keys of that sound is the use of a Shin Ei Fuzz-Wah (8 transistors) pedal. This is a two/three effects into one pedal, a 6 transistor fuzz with octaver (high octave) plus a 2 transistor Wah effect at the end. JAMC did not make lots of use of the Wah pedal as it is normally used, but they used it to reinforce the gain of a band in the mid tones to couple the sound, so they set the pedal at one position and didn't move it.
These are the schematics of the original Shin Ei Fuzz-Wah pedal:

Find here a demo video of the Shin Ei Fuzz-Wah pedal:
With all that in mind I made a first version of the Super Fuzz with Octaver pedal with scrapped through-hole conventional components on a Vero board using 2N2219A transistors 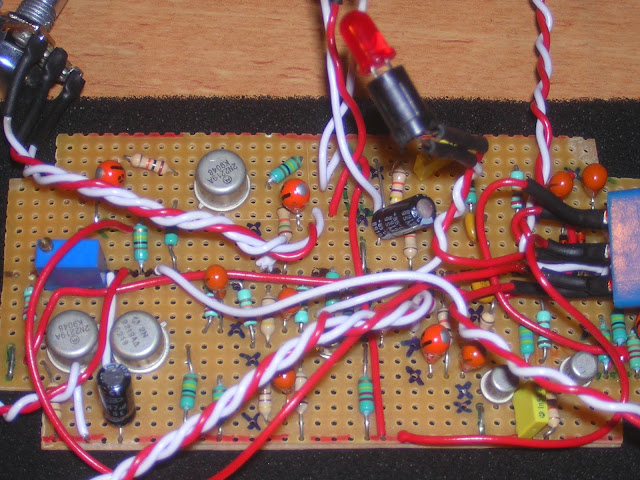 The first version on the Super Fuzz pedal can be seen here on the left of the picture: 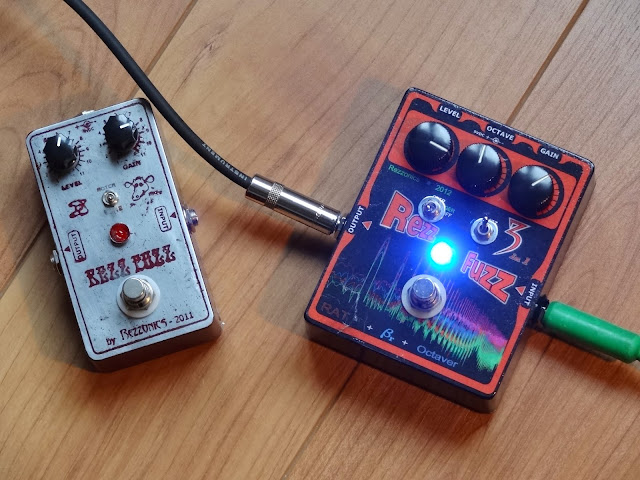 The result was quite deceiving, the circuit has lots of gain and it was too noisy, too much, even for playing a PsychoCandy cover, specially when powered at 9V. A higher DC power of 15V reduced a bit the noise but it was still an undesirable result.

(Update 23/08/2015: Source files on Github)
I decided to restart the work using surface mount devices (SMD), a professional PCB and include the Wah sections as well as several improvements and modifications to the original circuit.

These are the schematics of the Super Fuzz-Wah design: 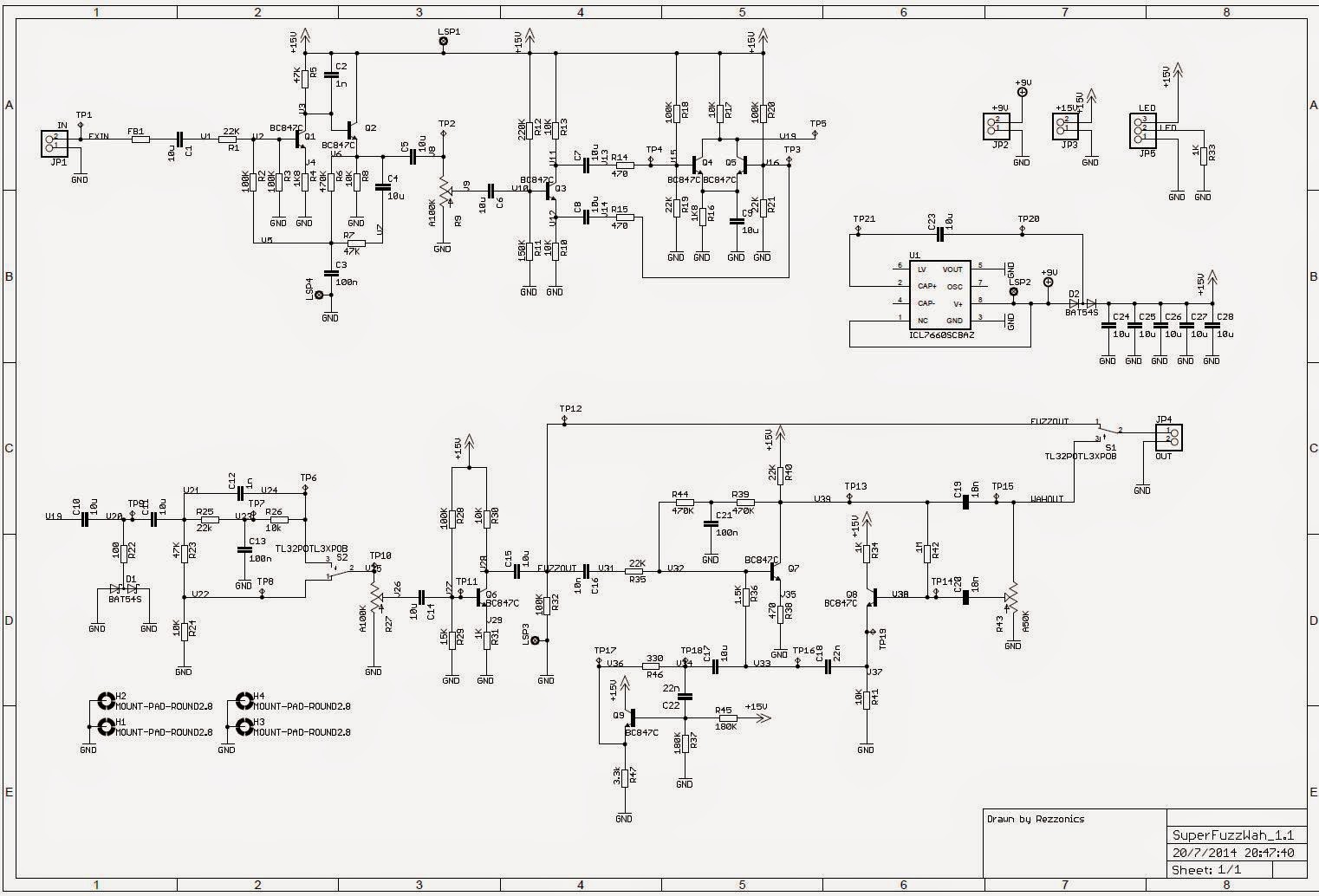 I used BC847C high gain (hfe = 520typ) SMD SOT-23 NPN transistors.
The improvements on the circuit are the following:
Check my post on replacing germanium diodes with Schottky diodes plus series resistor.

The charge pump regulator ICL7660SCBA allows doubling the power supply from 9V to 18V, however this charge pump regulator uses an internal oscillator with a quite low and audible switching frequency of 10 kHz. If it is used in its default oscillation mode this frequency is seen as a ripple frequency on the power supply, since this pedal has lots of gain in its transistor circuits, this ripple noise can be amplified and heard as a very nasty and unpleasant high pitch noise. For that reason, it is absolutely required to short pin 1 (boost frequency pin) with pin 8 (V+) in order to get a higher switching frequency of 35 kHz, out of the audible spectrum. 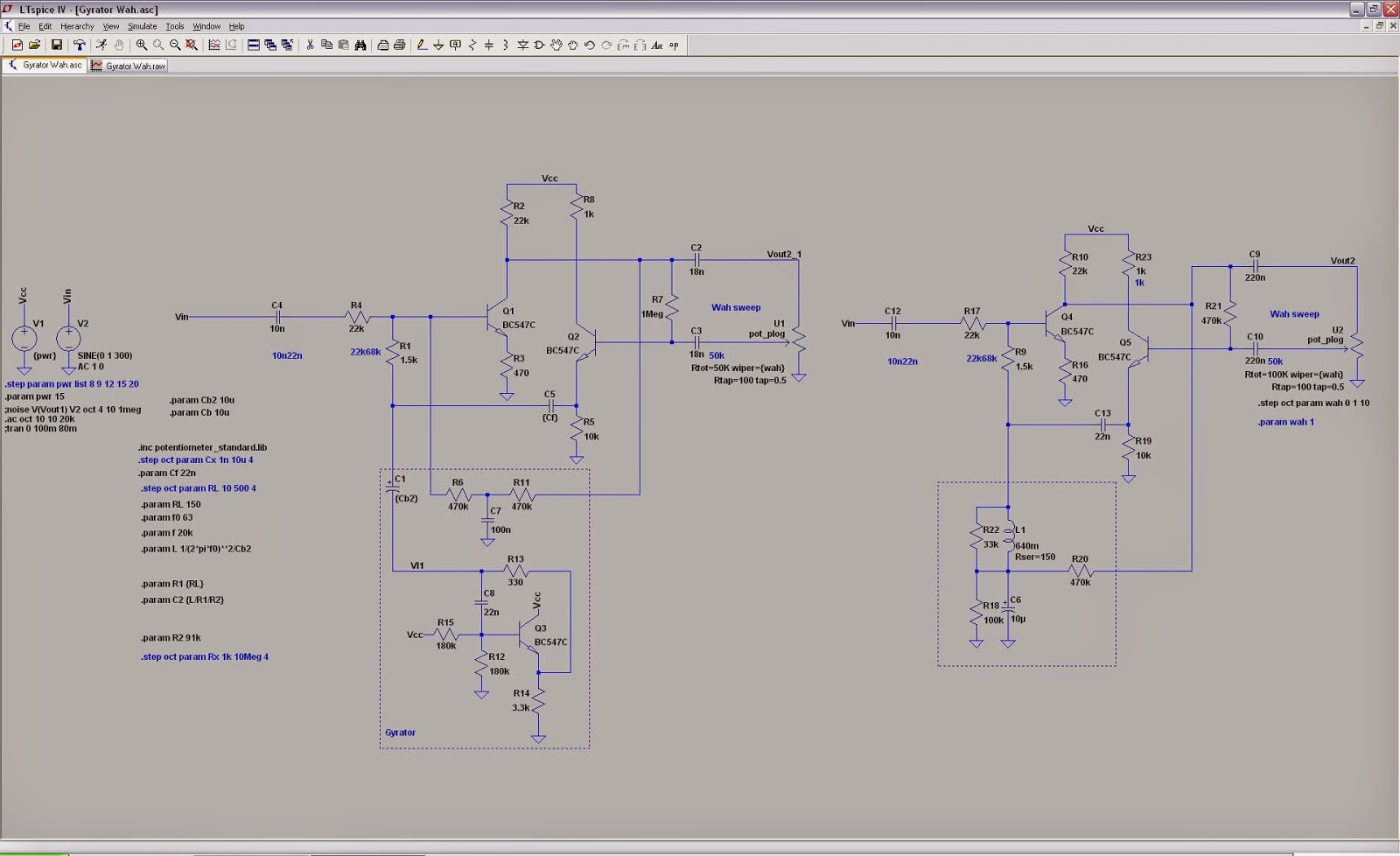 This is the frequency response of the original circuit when varying the wah potentiometer: 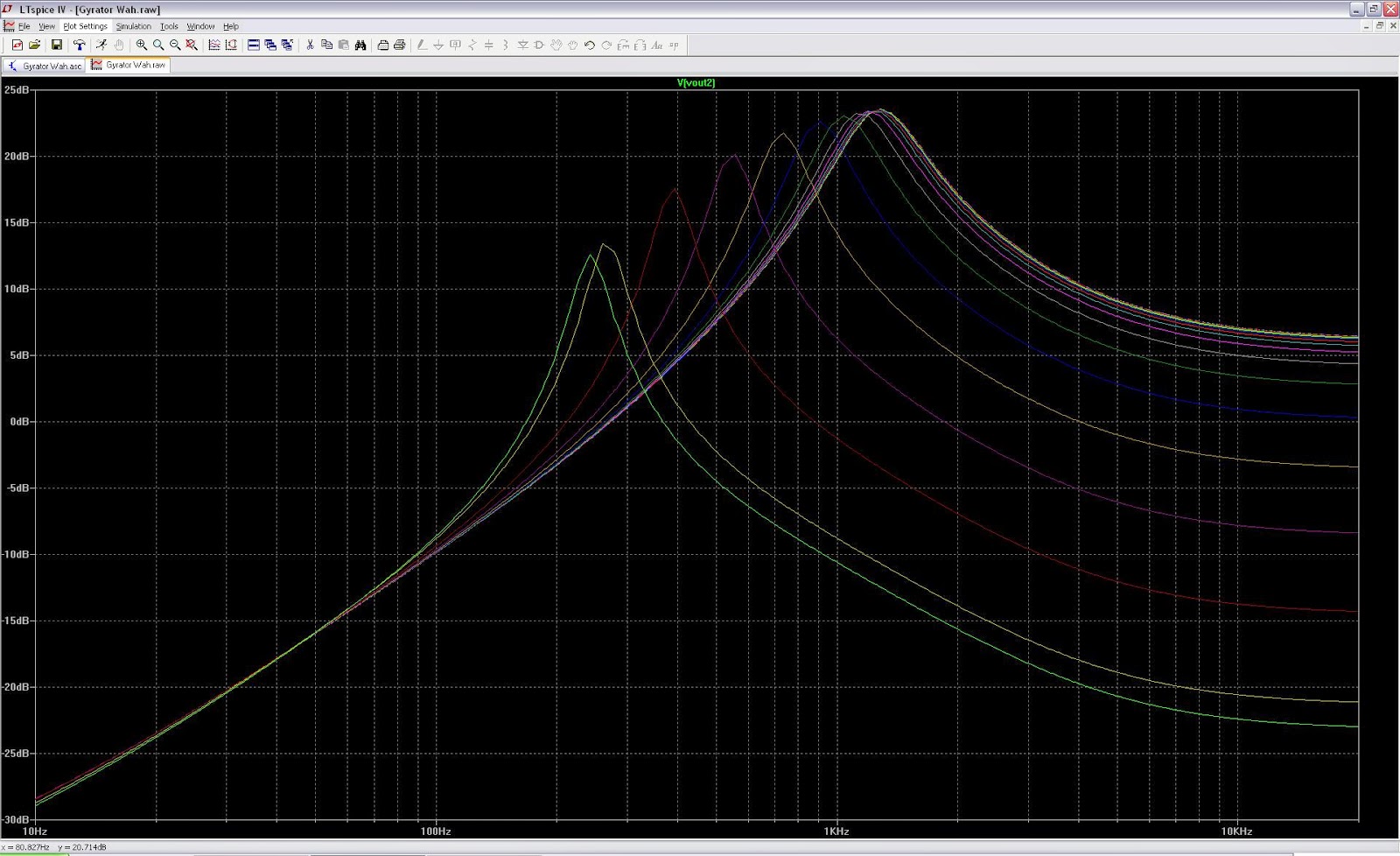 It is a tuned band-pass filter with its peak moving from 240 Hz to 1.28 kHz, increasing the gain from 12.5 to 23.5 dB.
And this is the frequency response of the gyrator circuit when varying the potentiometer: 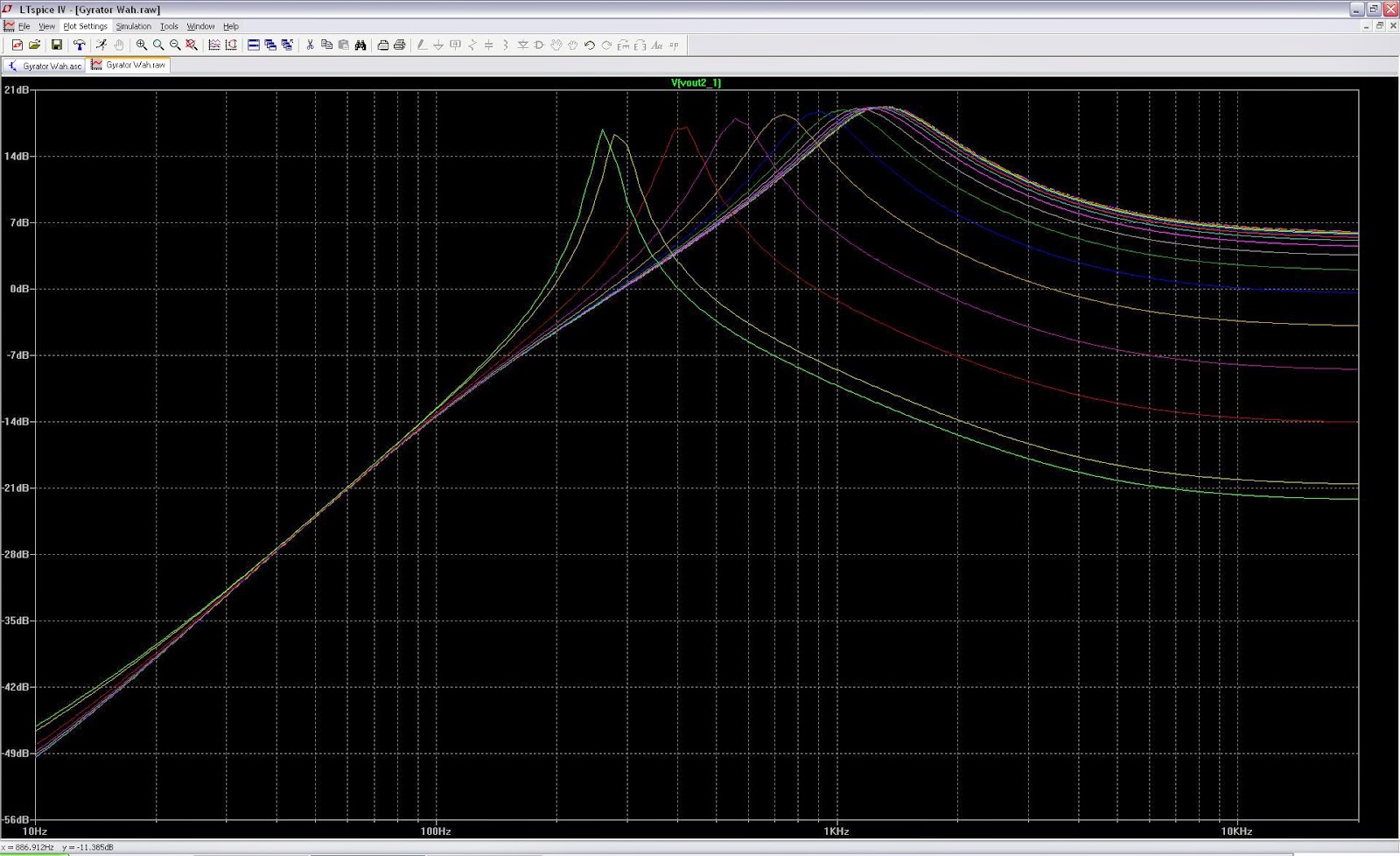 Again it is a tuned band-pass filter with its peak moving from 260Hz to 1.28 kHz, slightly increasing the gain from 16.5 dB to 19.2dB.
So we obtain a quite similar result with even a more stable gain peak. 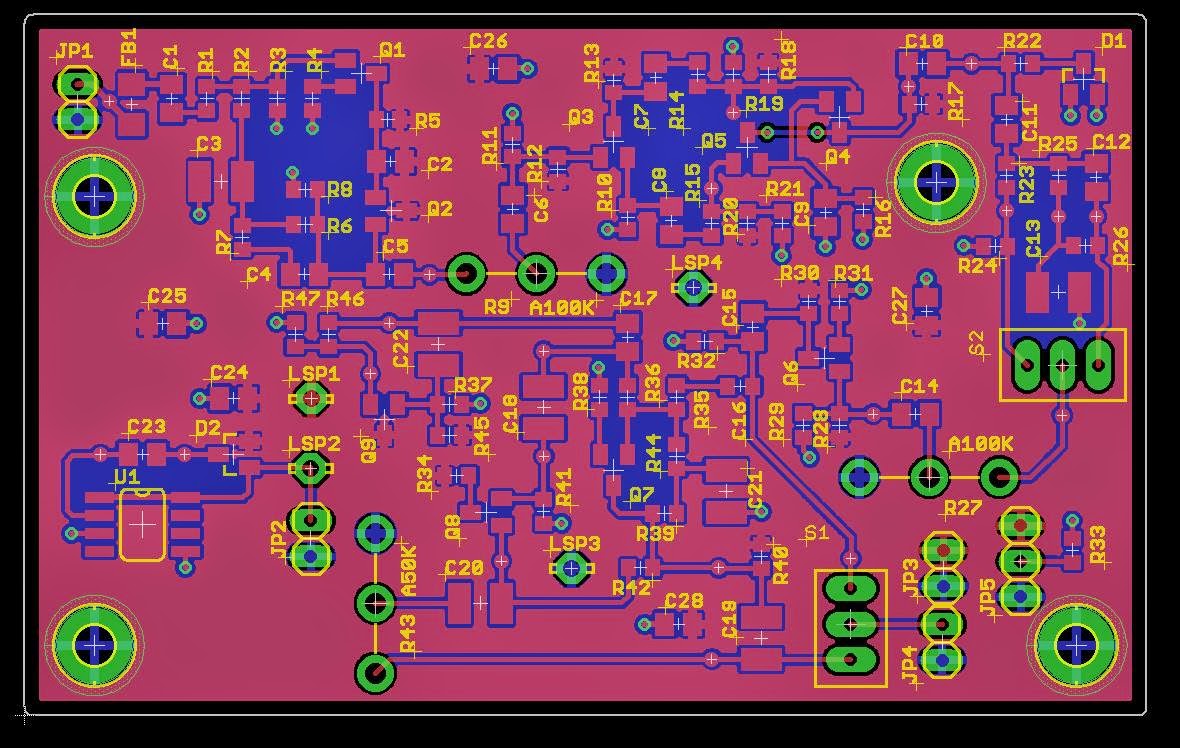 Schematics and PCB layout was designed using Eagle CAD. The PCB layout can be uploaded into Eurocircuits website, and a quote can be obtained immediately, I paid 70 € for 2 boards prototypes in a 7 day turnaround, the quality is really good.
I purchased the components at Mouser website. You can find here the BoM, total cost of components for one prototype was 26 €.
To solder the components I used a low temperature (138°C ) CR11 solder paste Sn42Bi58 and a hot air soldering station, the results are very professional and clean. This is the finished PCB with all components (except external switches, jacks and potentiometers) mounted. 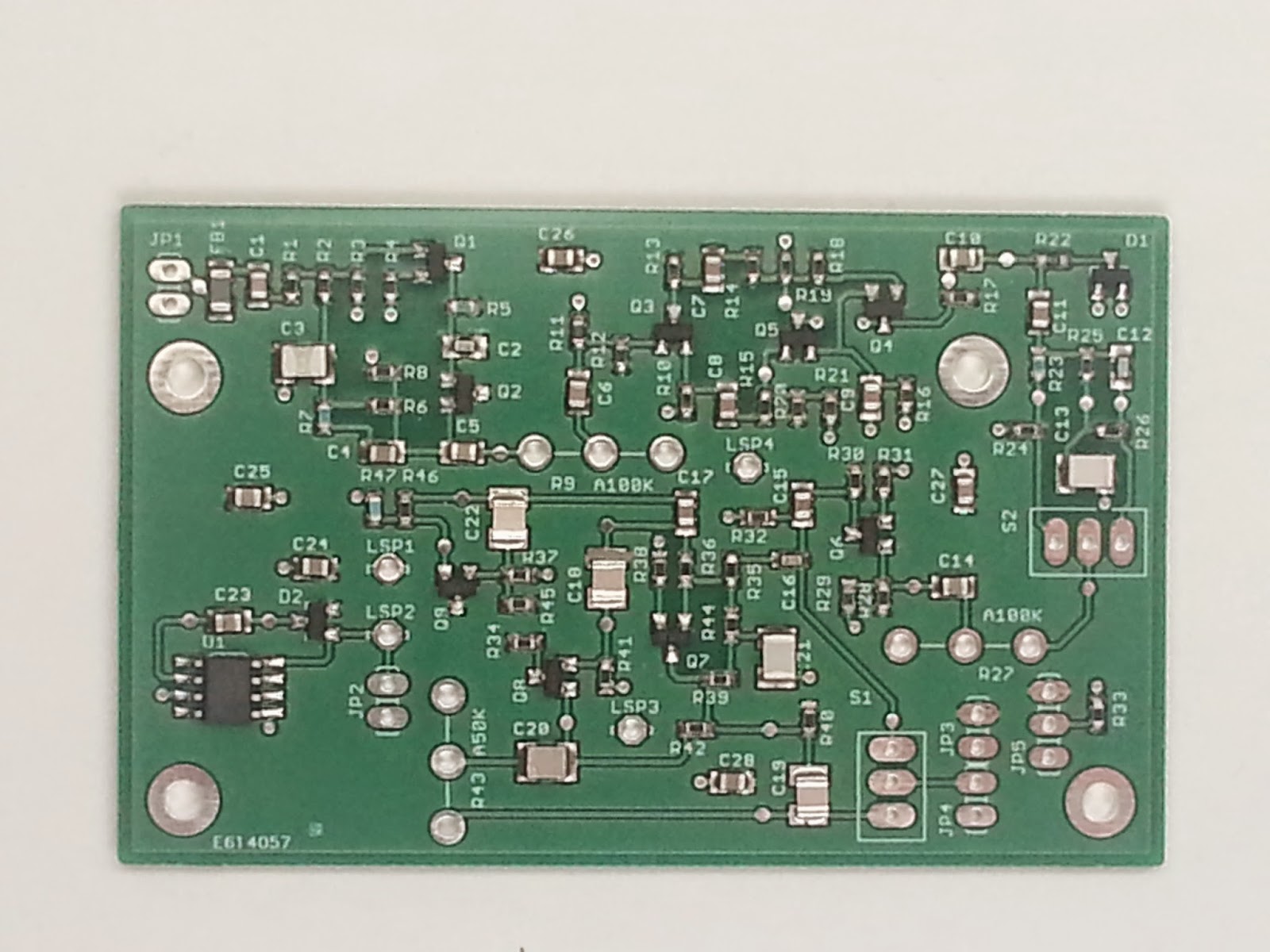 All the cables, jacks, connectors, switches and potentiometers soldered and ready for debug and verification 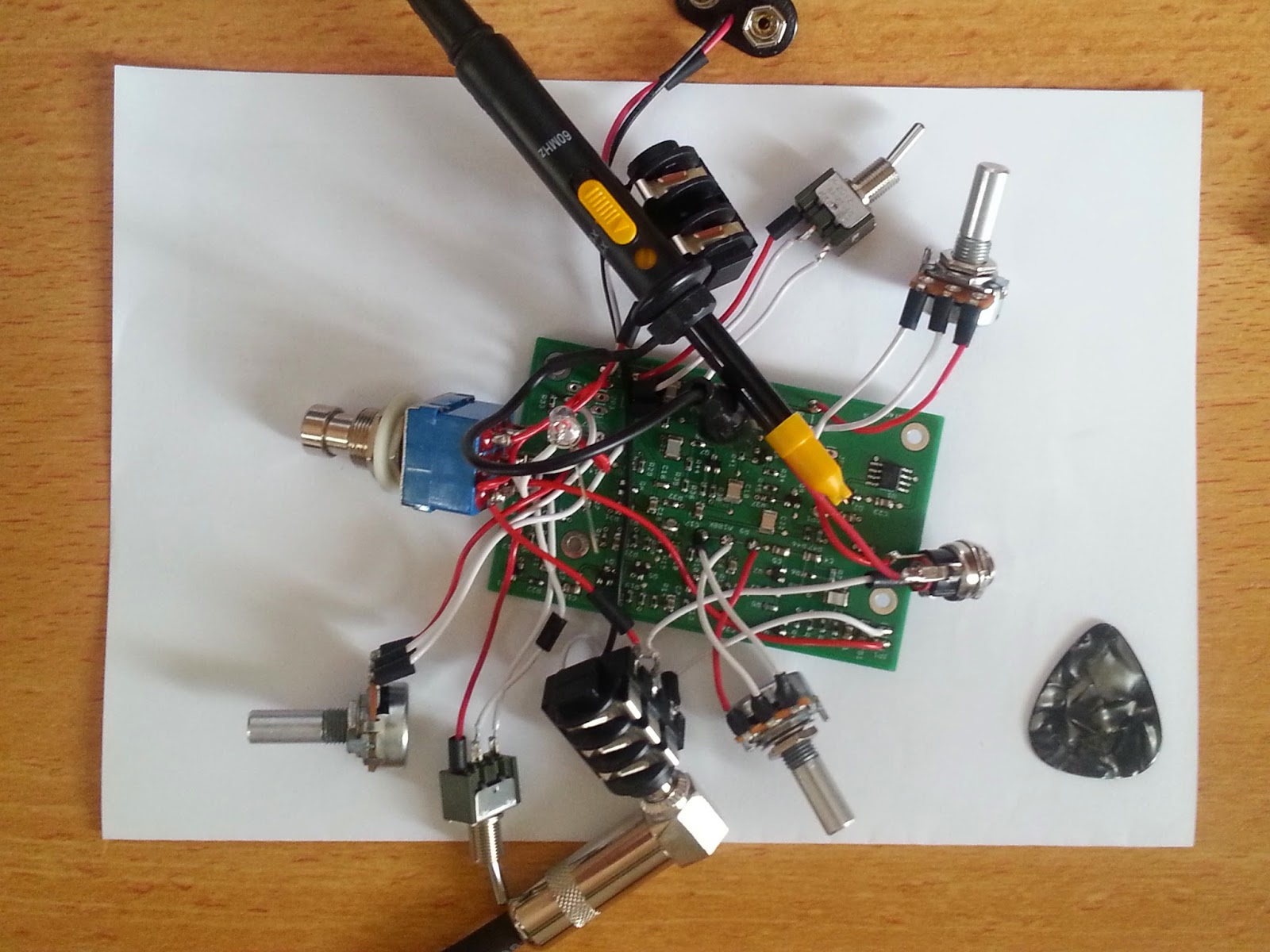