The Catalinbread Dirty Little Secret is an overdrive/distortion pedal that tries to emulate super-lead o super-bass Marshall amplifiers using JFET transistors instead of tube valves.
The tone filter section is identical to the one used on Marshall amplifiers.
Starting with the Klon Centaur boost/overdrive pedal I am trying to show that guitar pedals circuitry can be powered at lower voltages than the standard 9V, using the appropriate components and circuits.
When I started Spice simulations the task seemed quite challenging, it was quite difficult to make the JFETs work at 3.3V and even when they worked at 3.3V it was quite difficult to properly bias the JFET to avoid distortion. 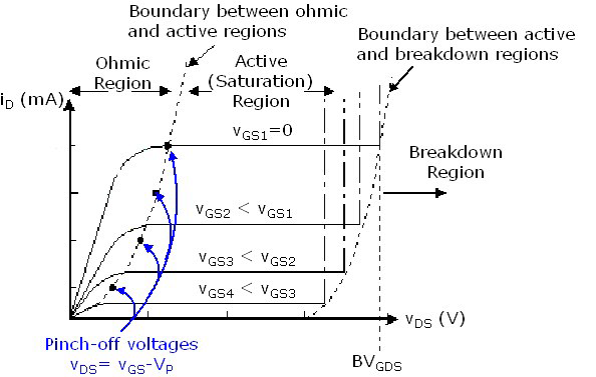 The secret to make a JFET work at low voltages is to find JFETs with low pinch-off voltages. The pinch-off voltage is defined by the dotted line on the left of the figure above, this line represents the boundary between the ohmic region and the active (or saturation) region. A JFET transistor should work in the active region. The problem is that the selection tools that offer distributors like Digikey or Mouser to choose a transistor don't provide the pinch-off voltages, they usually provide the Vgs cut-off (Vgs at which the JFET start conducting) and the drain current at Vgs=0. I finally find a JFET manufacturer specialist (InterFET) that provides these pinch-off voltages.

Apparently the MMBFJ201 should be more suitable for its lower pinch-off voltage, but as we will see later, the MMBF4117 has lower drain currents which are more suited for working at lower voltages and higher resistor values.

The first thing is to find Spice models for those JFET transistors, actually I found different models that showed different behaviors during simulations. 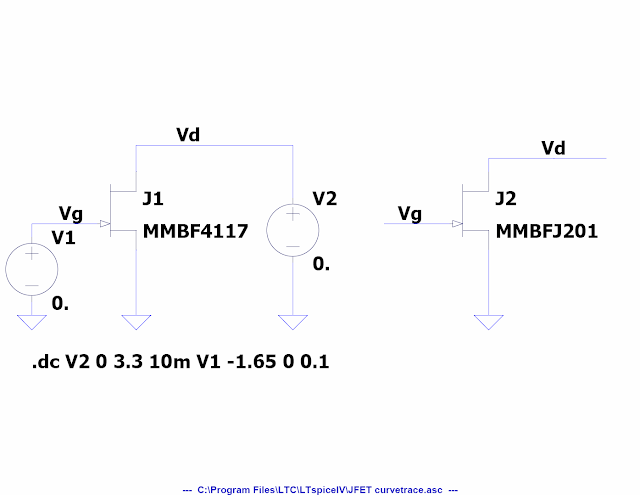 The following figure shows the Id vs Vds curve for mmbf4117: 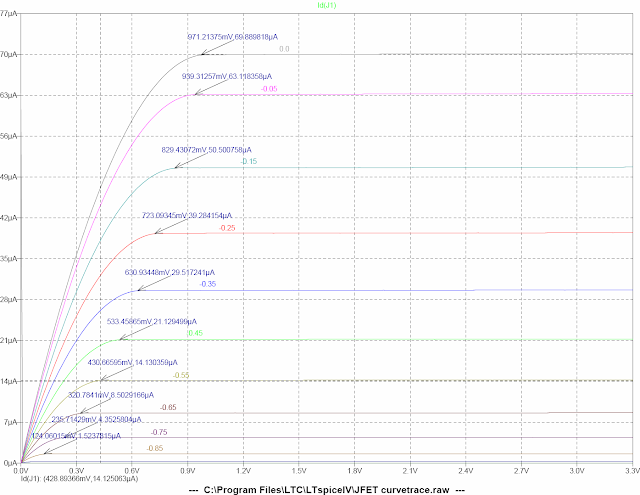 The following figure shows the Id vs Vds curve for mmbfj201: 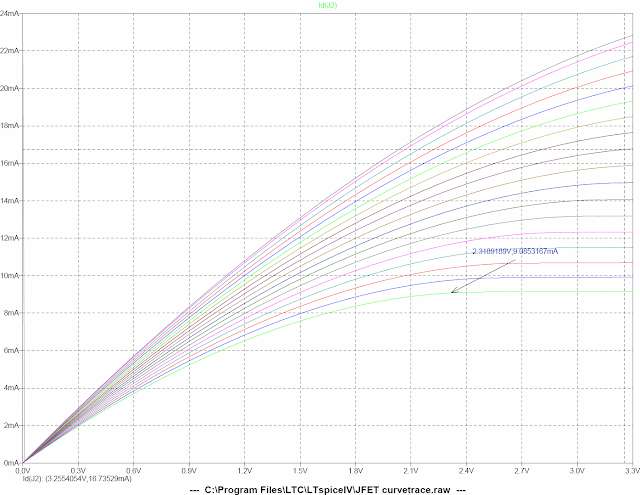 The pinch-off voltage is already as high as -2.3V at Vgs=-1.65V, For Vgs=-075V the pinch-off voltage is 3.3V. As we can see, this device is not suitable to be used at 3.3V, the drain currents are quite high for very negative Vgs voltages (9mA at Vgs=-1.65V) so it cannot be properly biased, and the pinch-off voltages are very high making impossible to work in the active region with them.
These curves from a Fairchild Semiconductor J201 Spice model do not correspond with the values announced in the InterFET page but they actually correspond with the curves found on the datasheet, so I think that the InterFET J201 model it's quite different form the Fairchild Semiconductor J201 device that it's currently found through distributors.

I actually found a J201 Spice model that had very good characteristics corresponding to those announced by InterFET: 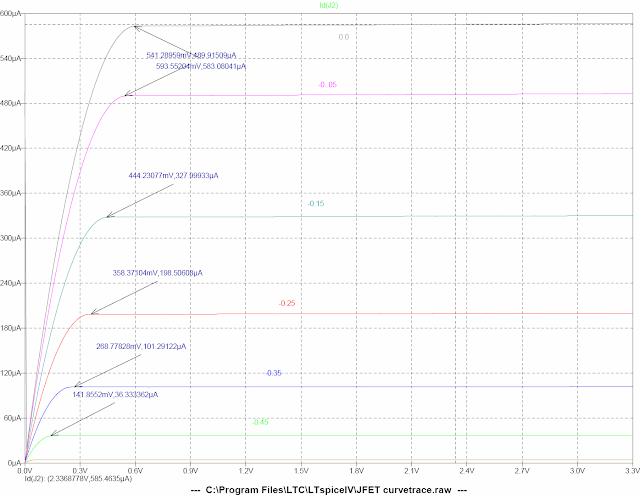 But as the device that is readily available is the Fairchild one, MMBFJ201 device had to be discarded.

In order to have maximum voltage margin, the JFET has to be biased in a way that Vds is set at half the power supply voltage, so if power supply voltage is 3.3V, Vds has to be set at 1,65V. In the following circuit and for a given drain resistance Rd, we must find the biasing value of Vgs at which Vds = 1.65V. At Id=0, Vds=3.3V for any value of Rd, but we must find an Rd value that at low values of Vds still keeps in the active region to avoid saturation, hence the lower the pinch-off voltage, the easier to find a low enough Rd that cuts the JFET curves at low voltages in the active region. The slope of the straight line is inversely proportional to Rd, we could always find a value of Rd that is high enough to keep in the active region, but if Rd is too high, currents are too low, our circuit becomes too sensitive to noise and it cannot accept any load. 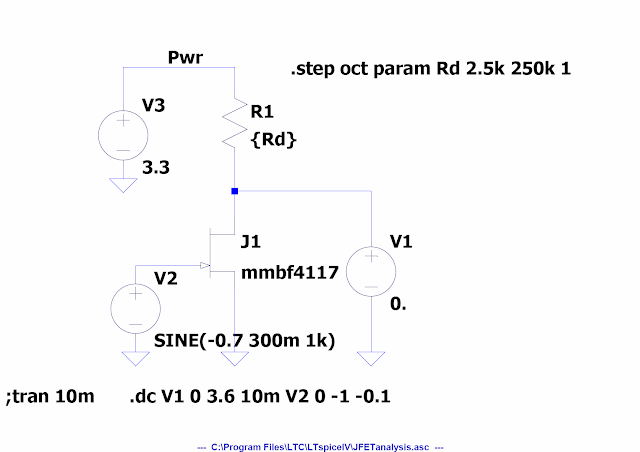 The red curve below shows the drain current Id for different values of Vgs from 0V to -1V in steps of 100mV. The green lines represent the current through Rd vs Vds, the higher Rd value the lower the slope. To find the proper biasing point, we find a point where a green line crosses a red line at approximately 1.65V, but where the green line crosses a red line in the ohmic region at quite low Vds voltage. For Rd=250k we find a biasing point at Vds=1.65 and Id=6.6uA, for Vgs= -700mV 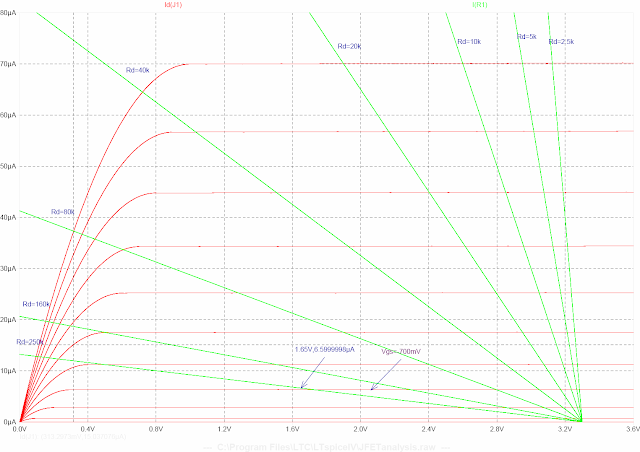 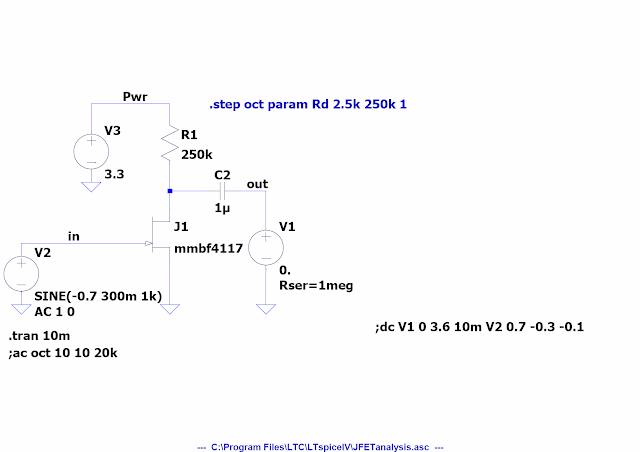 The output voltage has been amplified to 2.78Vpp 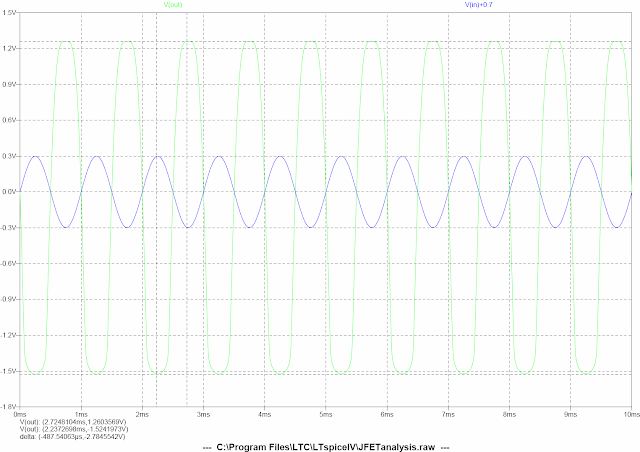 Another important characteristic is that the biasing Vgs voltage is as close as 0V as possible, N-channel JFETs are biased at negative voltages, if Vgs is very negative it will be difficult or even impossible to bias it. The way to bias Vgs to a negative voltage is adding a source to ground resistor (Rs) that will keep Vs higher than Vg. But this resistance Rs will add to Vds affecting the output voltage, unless that it is coupled with a capacitor in parallel so that Rs is only seen at DC biasing but small signal sees a short to GND through the capacitor. 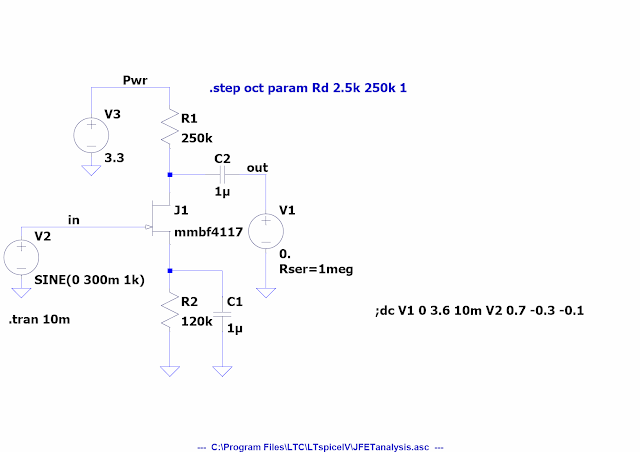 We obtain a similar time response with a 300mV sine 1kHz input but no input bias, with Rd=250K, output resistance of 1Mohm and Rs=120k in parallel with 1uF. 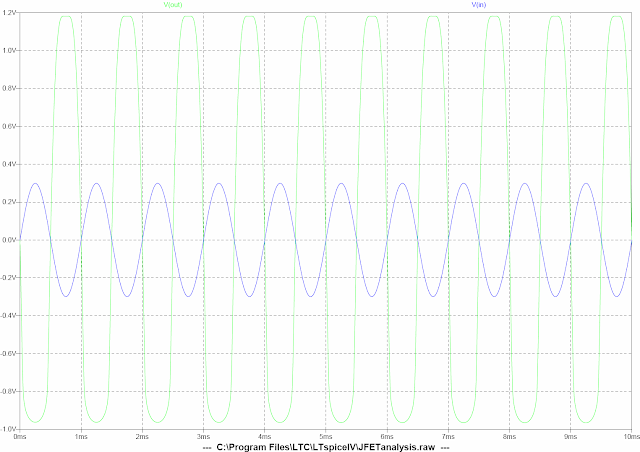 Let's analyse the biasing of the two JFET amplifier circuit that will be the basis of DLS pedal.
The same biasing current will circulate through both JFETs, which means that Vgs bias will have to be identical for both, then the voltage on the gate of the top JFET will have to be Vin+Vout, where Vin is the biasing voltage of the bottom JFET. 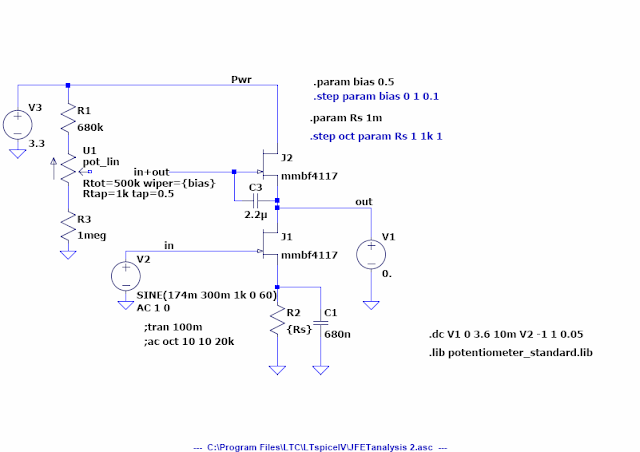 The obtained curve  is shown below. The biasing point will be selected from a point where blue and cyan curves cross and the current of both JFETs is identical as close as possible to Vds=1.65V (power supply mid-point) The selected blue curve will give us the Vgs biasing point (160mV)
Vds=1.65V, Id = 94uA and Vgs=158mV. 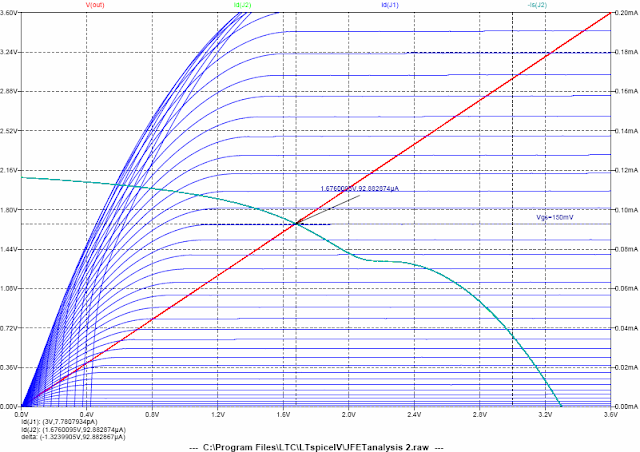 The small signal frequency response shows a maximum gain of 34.5dB at 1kHz and 32.7dB at 10Hz for bias potentiometer set at 0.4. 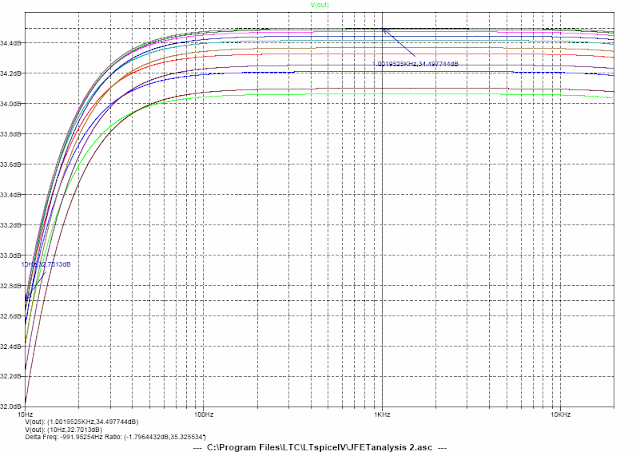 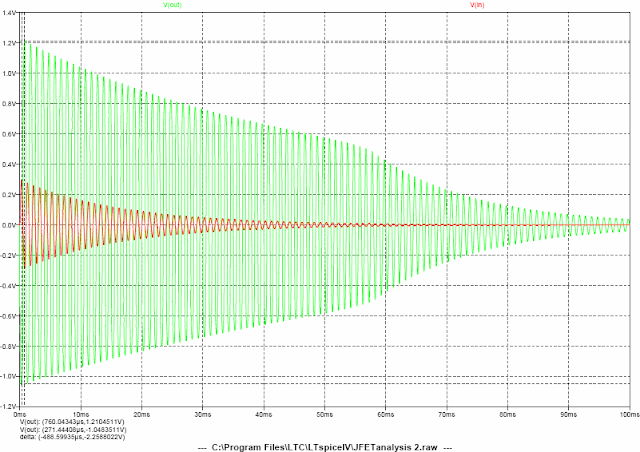 The figure below shows schematics of the DLS 3.3V circuit using MMBF4117 JFET: 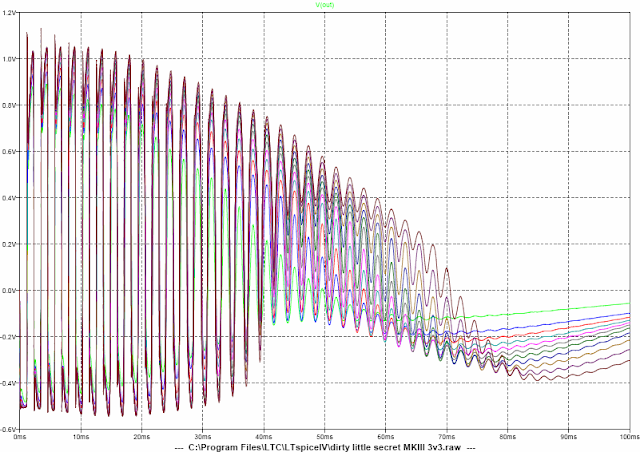 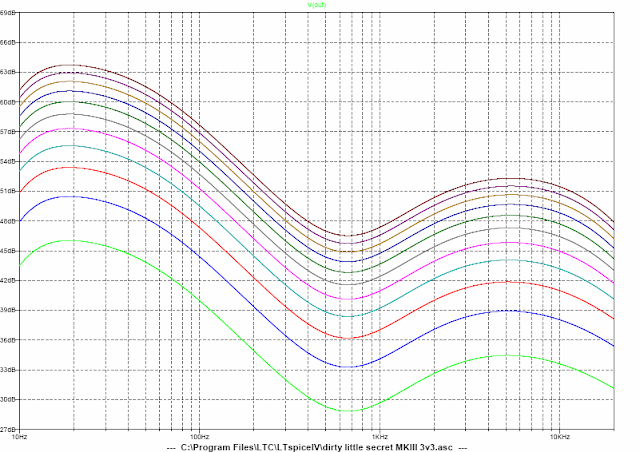 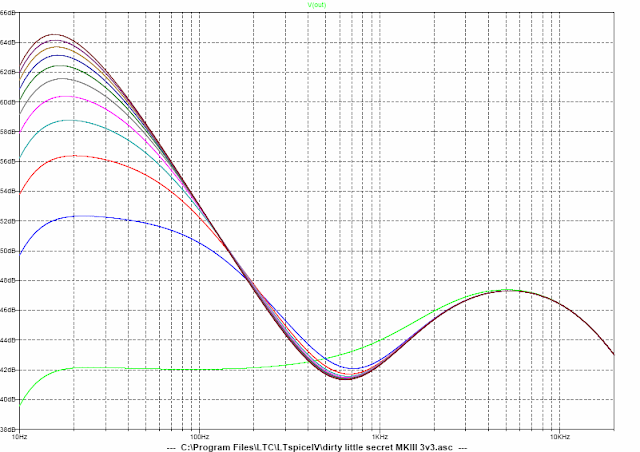 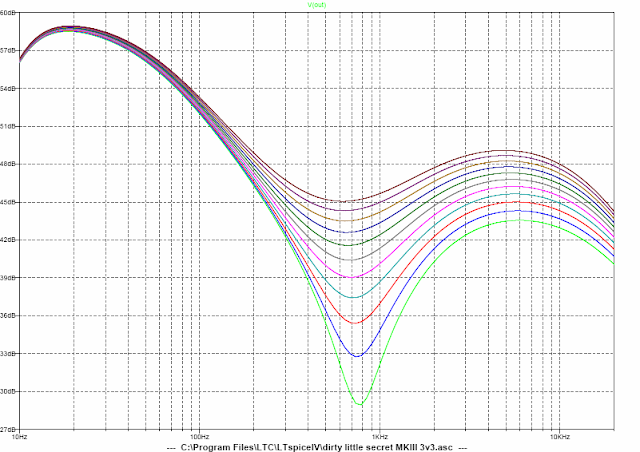 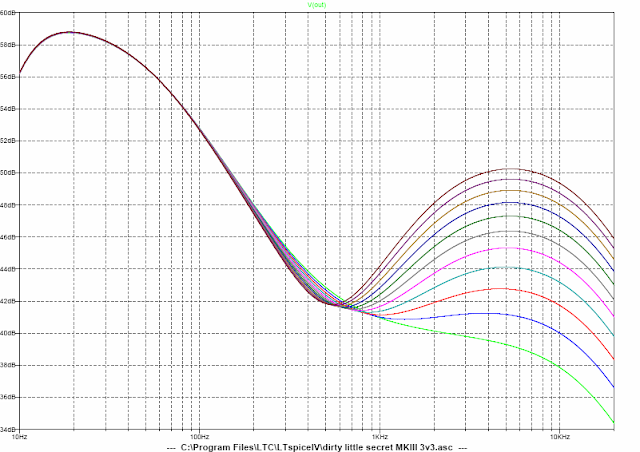 In order to be able to compare below are the frequency response with gain from 0 to 1 in 0.1 steps and tone controls set with bass=0.3, mid=0.6 and treble=0.6 for the original DLS circuit powered at 9V using MPF4393 JFET transitor. Almost no difference using a 2N5457 model: 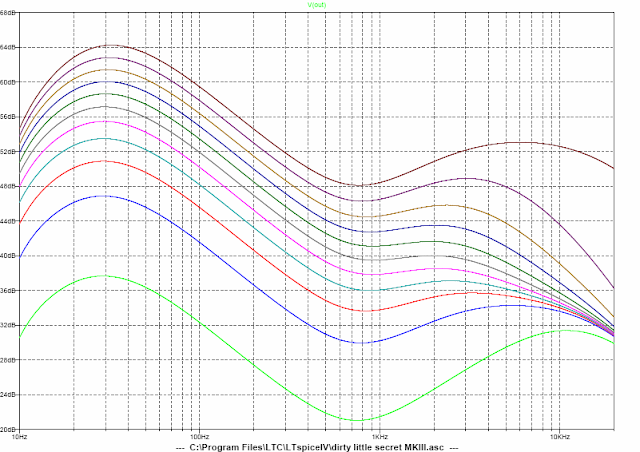 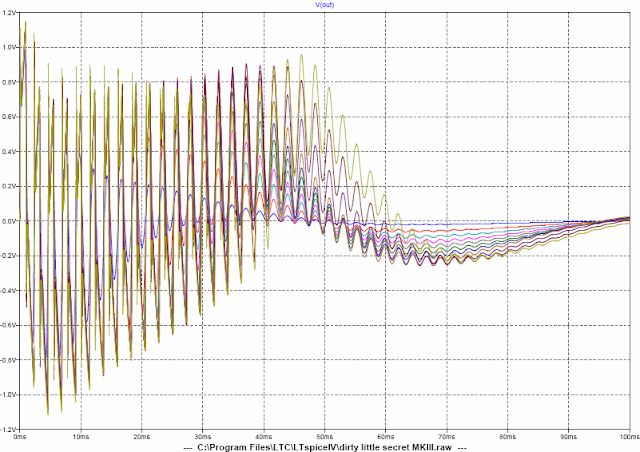