For this guitar pedal project I wanted to mix some of my most iconic distortion effects into a single one:

So the Rezz-Fuzz 3 in 1 pedal basically had to be a:

Apart from that, I wanted to experiment with different type of diodes for the hard clipping section of the RAT distortion part.
The main issue was that mixing both pedals into one would require too many knobs: 3 for the RAT, 3 for the Fuzz War, plus one for the octave up, plus at least 2 switch buttons: one for clipping diode selection and at least one for effect switching, that is far too many controls for a single pedal to be packed in a 1590BB box.

Some simplification had to be made, the first one was to remove tone control on the RAT and replace it by octave up control. But since only one effect is used at a time, it would be good to reuse the same knobs for both effects. The solution was to use analog SPDT switches for two potentiometers on each of the 3 potentiometer contacts, plus another 2 SPDT switches for effect input and output selection. A 4053 device includes 3 SPDT switches, 3 of them were required.

These are the schematics of the Rezz-Fuzz 3 in 1 effect in Eagle CAD: 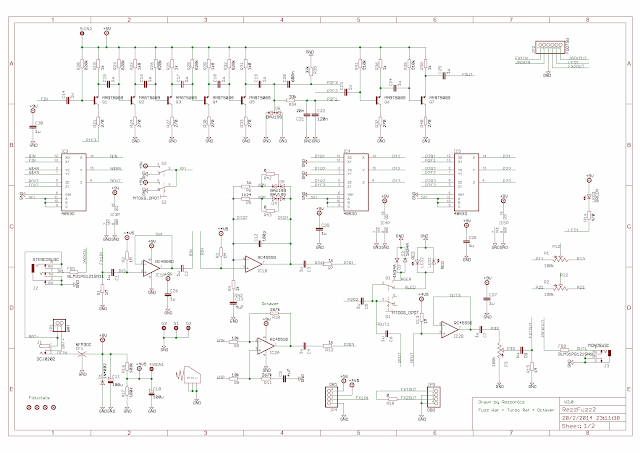 On the top it's the βr or reverse hfe part of the circuit consisting of 7 transistor stages. At first sight there seems to be a big mistake on this circuit: Those NPN transistors seem to be inverted, but they are actually not, collector and emitter are inverted on purpose, actually base-emitter and base-collector both consist of a PN junction and they could be inverted, except that the gain of the resultant inverted transistor is what is called the βr (or hfe reverse) which usually is much lower than the direct gain. Here is an article from AMZ website that explains the characteristics of  reverse beta amplifiers, apparently the clipping on a reversed transistor is quite different from a regular transistor generating different harmonics. The reason for having 7 transistors is because the gain on reverse beta transistors is much lower.

The problem with this is that actually the reverse hfe on most transistors is not specified, is not part of the manufacturing control process, and hence it may have wide variations. So the only choice here is manual selection after gain measurement with a multimeter able to measure hfe. On the other hand, this add a uniqueness to each pedal, and maybe the need to manually adjust resistors for each manufactured effect. The other issue is that I am not sure that Spice models can actually simulate the real behavior of transistor in reverse configuration. For this reason I will not include LTSpice simulations of the circuit.
I had to manually adjust the resistor values to make this circuit work, the final resistor values were very different from schematics published on internet. The recommended transistor base pull-ups were 430K on the first 5 stages and 910K on the last two stages, I had to change the value to 820K on the first 5 stages to properly bias the circuit and make it work. The recommended transistor emitter pull-downs were 390 ohms, I changed the values to 270 ohms. The recommended transistor collector pull-ups were 100K on the first 6 stages and 180K on the last 2 stages, I had to change the values to 1.2K in all stages in order to make it work.

At the bottom of the page it's the RAT effect with input and output buffer, soft clipping amplifier (that uses unbalanced diode clipping, R42 resistor is not installed) on top and octave-up on the bottom. Octave-up amplifier uses the feedback voltages between the feedback diodes and resistors to build a fully rectified version of the distorted signal.

On the bottom left side of the page it's the +9V DC input jack connector, battery terminals, an EMI filter, resistor divider to generate mid point voltage of +4.5V, decoupling capacitors and inversion protection diode.

On the top right side there is a 6-pin 0.1'' header footprint to solder a flat cable between the effect PCB and the 3PDT push-button foot switch PCB. A small PCB was designed in order to directly connect the foot switch and the PCB with a 0.1'' pitch flat cable.

The PCB was made on two layers with dimensions of 85 mm x 75 mm with chamfered corners to leave place for box screw holes. Three footswitch PCBs were also added.

The finished pedal with a Turbo RAT look: If you want to build your own RezzFuzz 3-in-1 pedal find Eagle 6.3.0 files (schematics, PCB, gerbers, BoM) on this github repository.