For the practical implementation of the Tube Simulator, Eagle CAD was used for schematics capture and PCB layout.


Component Selection and Bill of Materials:

SMD devices where used for smaller sizer, 0603 resistors are a good compromise between easy hand solderability and small size.

Texas Instruments LME49723 audio dual operational amplifier was chosen as a good compromise between low distortion, quality, cost, size, nice SOIC packaging and high power supply voltage.
I particularly like TI website for its quick and easy selection of components by means of a parameters table and a large choice of components.

But I still used MLCC for signal bypassing and power supply decoupling.

The BoM was created in the Mouser website, with a huge selection of components and hardware

This is the link to he whole Bill of Materials on the Mouser website: 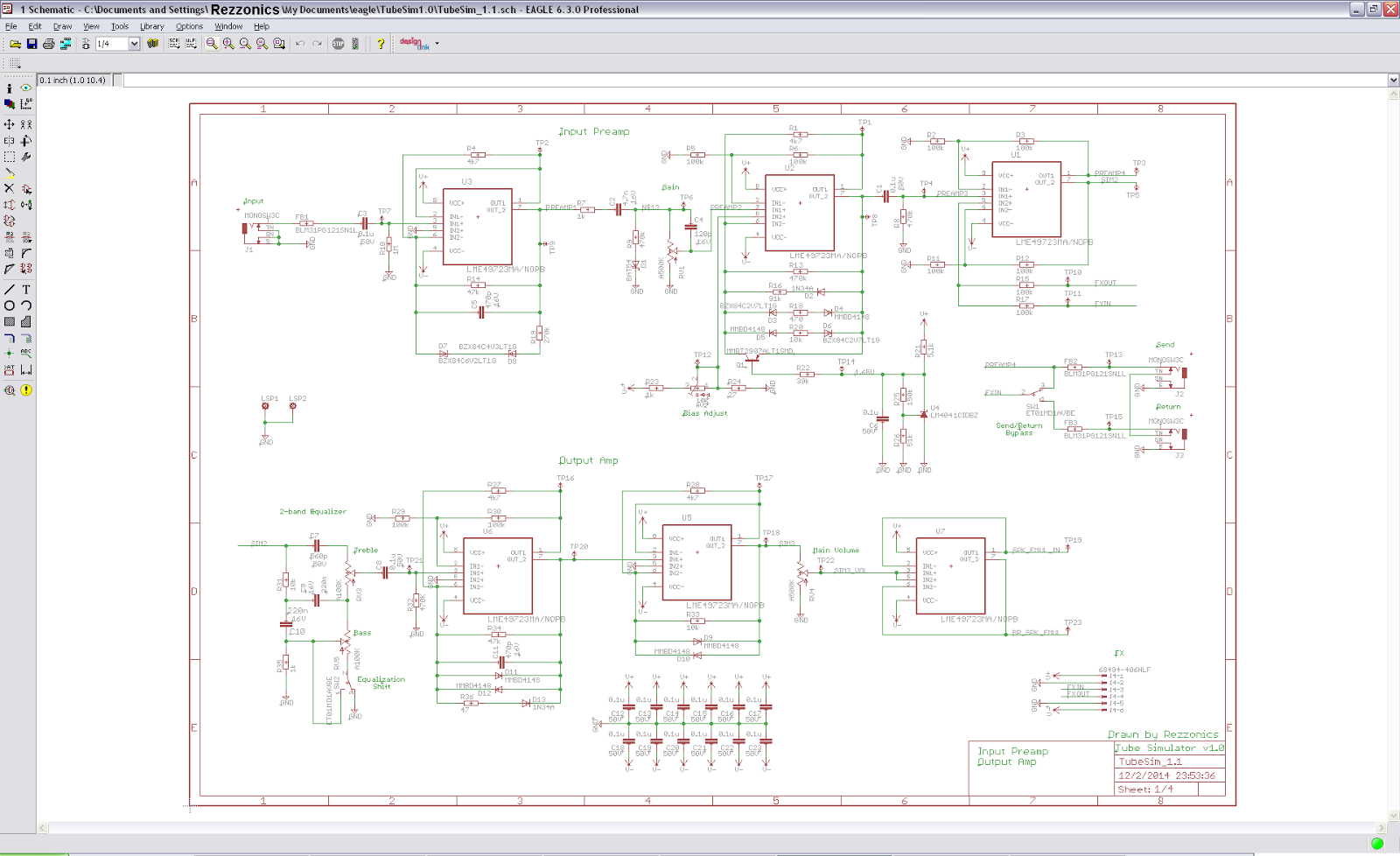 Each opamp stage is based in the aforementioned LME49723 device consisting of two opamps.

After the first opamp stage a Schottky diode BAT54 in series with a 470k resistor is used for soft clipping, this provides a clipping closer to germanium diodes.

On the second opamp stage there is a feedback branch with a NPN transistor (MMBT2907ALT1SMD) which has its base biased at 1.65V, a TI LM4041CIDBZ shunt voltage reference was used. Another feedback branch uses a 2.7V zener diode BZX84C2V7LT1G in series with a diode MMBD4148 and a 470ohm resistor for clipping negative cycles. A third branch used another 2.7V in series with a higher 10K resistor for soft clipping of positive cycles.

The third opamp stage is just a follower to send the signal to an external effect circuit and to the output amp section. The return is also input to this stage.

An equivalent circuit to the VOX AC30 bass/treble equalizer is placed at the input of the output amp section. The equalization switch adds a deeper mid notch when activated.

The first opamp stage of the output amp adds harder clipping with two silicon diodes MMBD4148 in parallel for clipping both positive and negative cycles. And also a schottky diode in series with a 47 ohm resistor that provides a kind of germanum diode clipping in the negative cycles.

A log 100K potentiometer provides volume level control of the output amp.
The forth opamp is a double follower that sends the signal to the speaker simulator and the Line out connector. 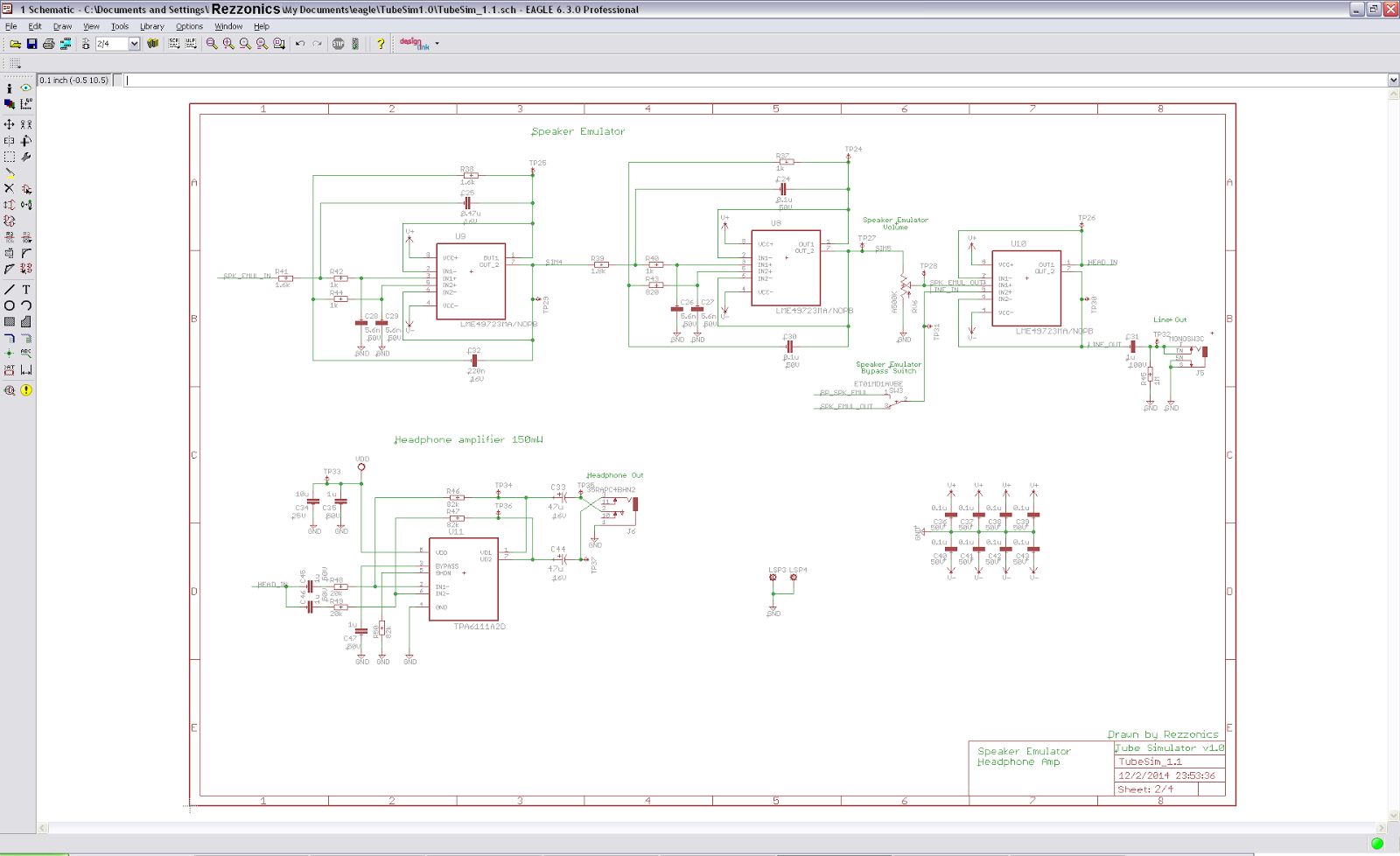 The second page of schematics shows the speaker emulator circuit based on four Sallen-Key low-pass filter sections to provide a frequency response similar to that of a 12'' speaker like Celestion Vintage 30, as shown in a previous post. This filter enhances considerably frequencies around 2.5 kHz.

A switch selects Line out signal from the speaker emulator output or the output amp to be connected to an external guitar amplifier.

The headphone input is always selected from the speaker emulator output. 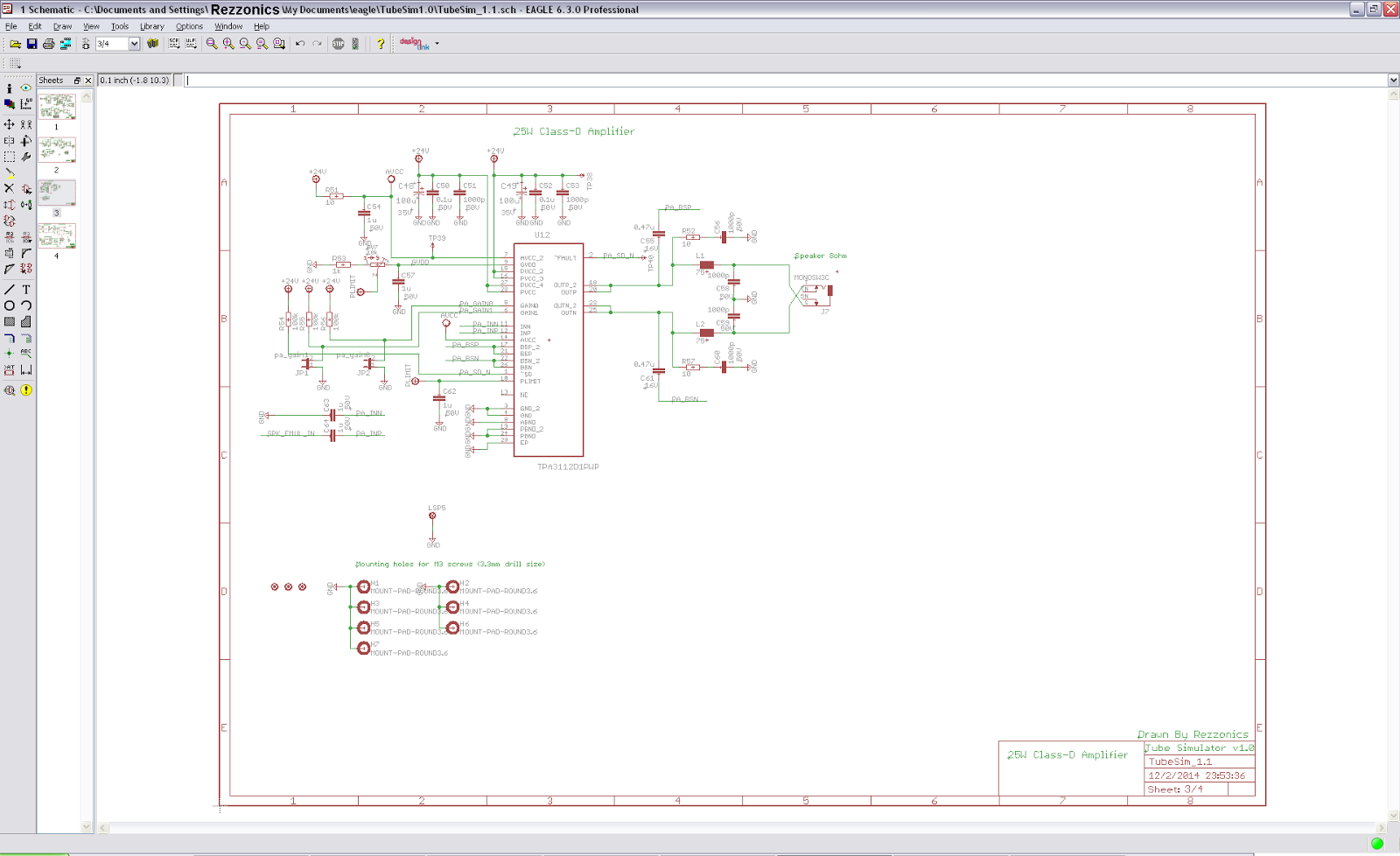 The third page of the schematics shows the 8ohm speaker amplifier based on a very efficient (94%) 25W Class-D amplifier TI TPA3112D1PWP with less than 0.1% THD+N from a +24V supply.

The high efficiency of this new class-D amplifiers allows a relatively high power output of 25W without the need of a heatsink on a small HTSSOP 28-pin device which considerably reduces PCB layout size. Special careful must be taken with the design of the central pad connected to the ground plane by numerous vias to allow proper heat dissipation. 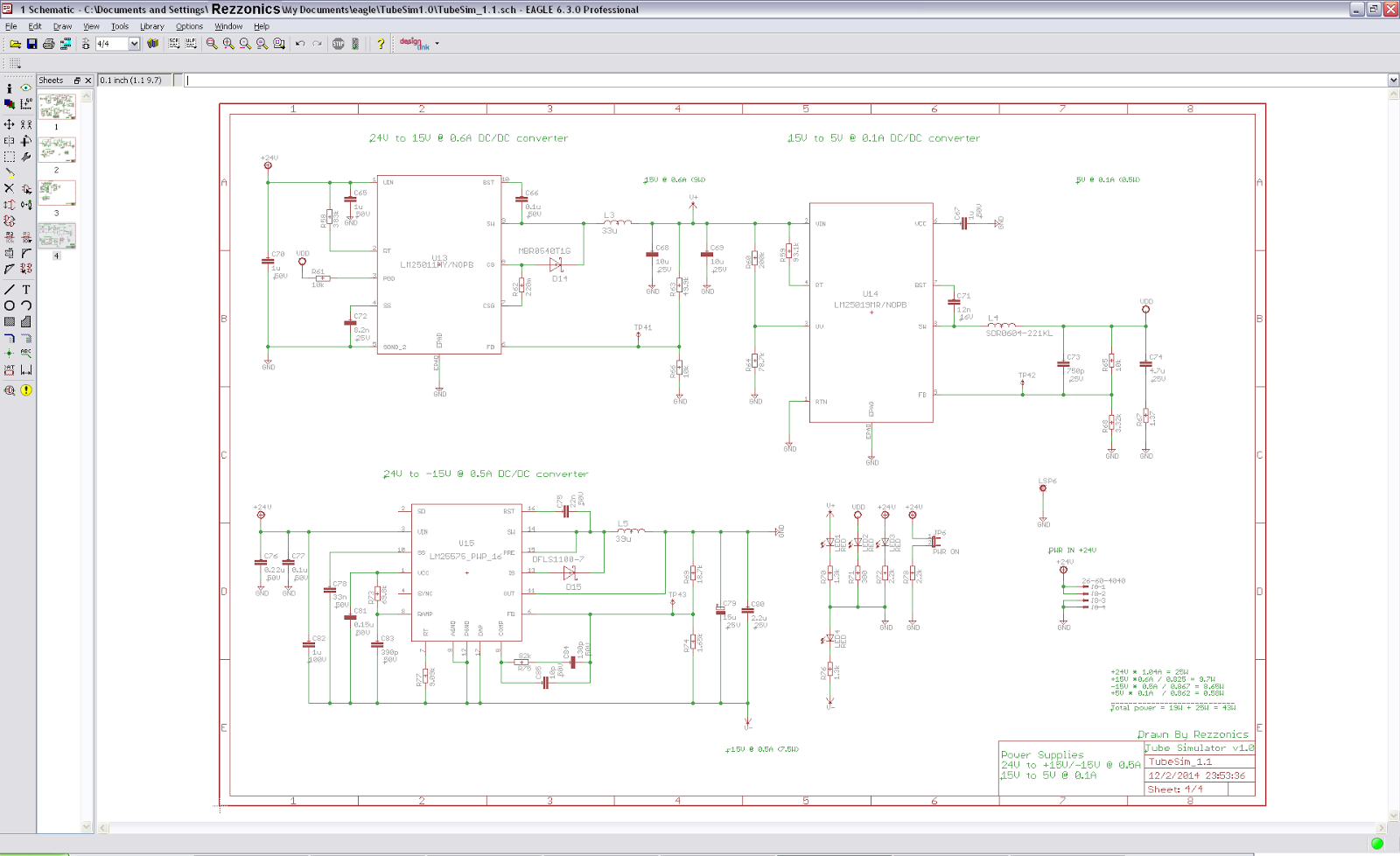 The Webench tool generates the whole BoM and it even allows to export schematics and layout to several of the most common CAD applications including Eagle. Sometimes the results are not very good but at least the footprint of mos common components can be created.

Most regulators are based on step-down or buck topology using integrated controllers (power switching MOSFET integrated in the controller device) except for the +24V to -15V that uses inverting buck-boost topology.